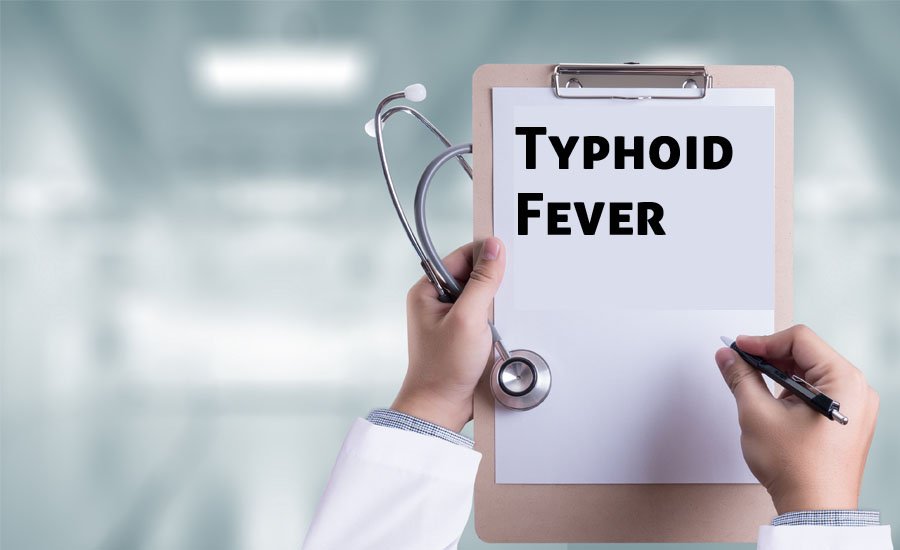 Today we are going to talk about typhoid fever, enteric fever, Salmonella infection yes this is a very common topic. And many of you might have already suffered from it in the past. What is typhoid fever, how does cause and what is this salmonella? This is the bacteria that is causing typhoid fever. So we will be talking about the causes, the symptoms, the tests, prevention treatment, everything.

Typhoid fever is an infection that causes diarrhea and rash and it is most commonly caused due to a bacteria Salmonella typhi also called s typhi. This s typhi can spread through contaminated food drinks or water. So if you eat or drink something that is contaminated with this bacteria the bacteria enters your body and it travels to your intestines. And then into your blood right then in the blood, they travel to the lymph nodes, gall bladder, the liver, the spleen and other parts of the body. Some people become carriers of this. Estoy Bien continues to release the bacteria in their stools for years and years. Spreading the disease that’s why it’s so common. Fever is very common in developing countries like India. Most cases of typhoid in the US or other countries are actually brought in from these developing countries.

Early symptoms include fever you will be a generalized feeling of illness and some abdominal pain. Fever can be between up to high 103 degrees Fahrenheit 139 point five-degree centigrades or even higher. And there can be severe diarrhea and this occurs as the disease gets worse. Some people develop a rash which is called rose spots. Rose spots which have small red spots on the abdomen and the chest. And many times there are some other symptoms like there can be bloody stools. There can be chills, they can be agitations or confusions. Right they can delirium or even some hallucinations, right there can be difficulty in paying attention. Nosebleed, severe fatigue, slow sluggish, weak feeling all these things can happen. So what to do you need to go to a doctor.

A doctor will basically take your history, a physical examination will be done, a complete blood count will be done which will show a high number of white blood cells. A blood culture will be done during the first week of the fever at that time only. During the first week of the figure, it can show some Salmonella typhi bacteria. Other tests that can help diagnosis include the Eliza blood test which looks for antibodies of Salmonella typhi bacteria also called typhoid dot IgM and IgG. There can be fluorescent antibody studies to look for substances that are specific to this particular bacteria.

The main treatment here is antibiotics to kill the bacteria but fluids and electrolytes can be given by even an IV root through a vein. Or you may add them into your drink with so you would have to take plenty of oral fluids and electrolytes. Antibiotics have an issue there is an increasing rate of antibiotic resistance throughout the world. So your doctor will have to check the current recommendation before choosing an antibiotic. And the culture report will also help. So what happens prognosis see sometimes symptoms usually improve in two to four weeks a month of treatment. The outcome is likely to be good with the early treatment but it can become poor if complications develop. And symptoms can return if the treatment has not been completed although if they have not cured the disease.

You can have the bacteria in the intestine so you can have intestinal bleeding. You can have intestinal perforation it can go in the kidneys so it can cause kidney failure, in cause peritonitis, severe abdominal. Complications can happen if you have been exposed to someone who has typhoid fever. If you have been an area where people have typhoid fever and you develop some symptoms like these. Or if you have had a type of fever and then the symptoms have returned then or you have developed some abdominal pain, decreased urine output or any new symptoms.

There is a vaccine and vaccine that is recommended for any travelers outside with a going to developing countries or with people who live in developing countries right where typhoid fever is prominent is present. When you are traveling to such an area where it is more prominent drink only boiled water or bottled water and eat well-cooked food. Eat them when they are hot, wash your hands thoroughly before eating and even after. Water treatment, waste disposal and in the food supply from contamination is the most important public health measure which the government should take to actually control this situation. Carriers of typhoid must not be allowed to work as tight as food handlers. This is also very important and for that, you can actually check the antibodies, so typhoid fever is also called enteric fever.